Phantoms of the French Shore screens at the Fishing for the Future Film Festival in Norris Point Newfoundland 2pm Saturday Sept. 29th at the Bonne Bay Marine Station.
Posted by Unknown at 09:58 No comments:

The history of French settlement in Newfoundland as told in 200 feet of hand stitched tapestry.

Phantoms of the French Shore 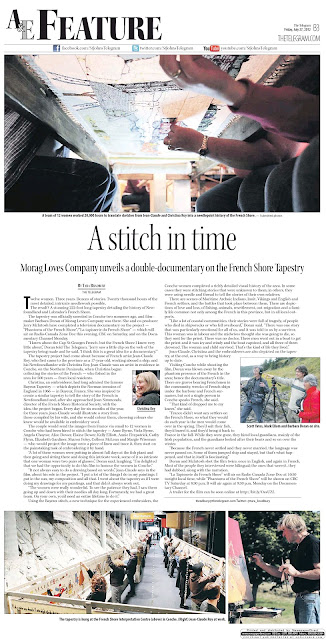 By: Will Cyr
Film Editor

What struck me most about Jean-Claude as I was cutting the documentary was his tenacity. When he sets out to fulfill Picasso’s idea of one not being a true artist until one has painted 10 000 tableaux, you can’t help but admire his devotion.

Francophone communities living outside of Quebec often live isolated from one another. We are often ignorant of the history and culture of other province’s francophone communities. I found it fascinating to follow the path of a people, and understand how specific events drastically changed the fabric of Newfoundland.

Working on this documentary made me curious to learn about other Canadian francophone communities. It is so interesting to see how francophone minorities throughout the country have managed to survive and thrive after hundreds of years.

We may be scattered throughout the country, but we are united by language. Our specific stories differ, but we share similar experiences and have faced familiar challenges. To understand and appreciate that can only make us stronger.
Posted by Unknown at 17:11 No comments:

The Making of: Phantoms of the French Shore

A Story within Stories

By Terence Mbulaheni
Phantoms of the French Shores is a documentary that contains many stories within a single narrative. This multilayered epic creates a mosaic guaranteed to entertain.   It depicts historical events, celebrates communities, and retells a 400 year history of conquest and culture. Symbolic meanings are weaved into the film and tapestry alike, creating parallel relationships between historical characters depicted in the artwork, the embroiders and the artist. The stories below are just two of those woven into the tapestry and the film.

STORY 1: The French Shore: the portrayal of a long history of British and French negotiations that resulted in France giving up its fishing rights on the French Shore of Newfoundland. This was a subject that appeared to Jean-Claude Roy as a card game in which the colonies and fishing rights were merely poker chips, and the players were only interested in what they could gain for themselves. 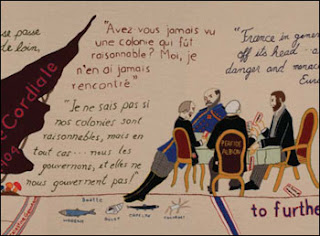 Inspired by the French impressionist artist Cezanne, Roy puts the diplomats at a card table, and shows both their apparent correctness and their dishonesty - one man pockets a card, while another lets the French Shore drop carelessly to the floor.

STORY 2: A story of parachutes: WW2 airmen crash in front of the school in Conche in 1942, frightening some of the children who think the airmen are Germans. The smaller image, taken from the border of the Tapestry, shows an event that occurred during the winter of 1943. Ranger John Hogan, a member of the Newfoundland Ranger Force, parachutes along with another man from their Royal Canadian Air Force plane. Hogan was unharmed, while his colleague was unable to walk. 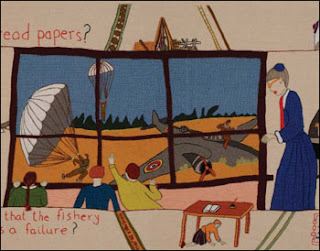 For 53 freezing winter days, Hogan cared for his injured colleague, providing food by trapping rabbits and gathering berries beneath the snow, until they were rescued. The larger story here is World War II: the device of the parachute is used to tell how the war was brought home to the people of the French Shore.

It was an Amazing Experience

By: Terence Mbulaheni
Joan Simmonds is the Director of the French Shore Historical Society in Conche Newfoundland and the Project Director for the French Shore Tapestry Project. She’s very active in Conche, beginning  her career as a catalyst in the community volunteering at age 13, selling tickets for the local parish committee. 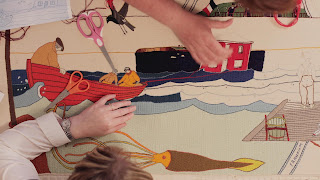 As Director of the Tapestry Project, she raised the funds necessary for the embroidery work to be carried out. Working tirelessly, she managed a team of more than a dozen people through out the three-year project, supervising the hiring and training of a dozen artistic embroiders from
the community, as well as arranging the space for the work to be carried out.


Joan says, "Any community has to depend on volunteers. You have to take care of your environment and it will take care of you".   The Newfoundland government recently honoured Joan as one of volunteers in the province who contribute over 35 million hours a year of valuable unpaid time to their communities and local organizations.

The Phantoms of the French Shore is a documentary film that weaves the complex historical relationship between opposing nations with epic human drama. Inspired by the 11th century Bayeux Tapestry, it is a must have work of art that explores the history of the French in Newfoundland